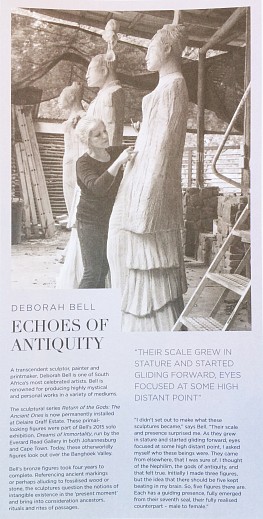 A trasncendant scultpuror, painter and print maker, Deborah Bell is one of South Africa's most celebrated artists. Bell is renowned for producing highly mystical and personal works in a variety of mediums.

The sculptural series Return of the Gods: The Ancient Ones is now permanently installed at Delaire Graff Estate. These primal-looking figures were part of Bell's 2015 solo exhibition, Dreams of Immortality, run by the Everard Read Gallery in both Johannesburg and Cape Town. Today, these otherworldly figures look out over the Banghoek Valley.

Bell's Bronze figures took four years to complete. Referencing ancient markings or perhaps alluding to fossilised wood or stone, the sculptures question the notions of intangible existence in the 'present moment'and bring into consideration ancestors, rituals and rites of passage.

"I didn't set out to make what these sculptures became. Their scale and presence surprised me. As they grew in stature and started gliding forward, eyes focused at some high distant point, I asked myself who these beings were. They came from elsewhere, that I was sure of. I thought of the Nephilim, the gods of antiquity, and that felt true. Initially I made three figures, but the idea that there should be five kept beating in my brain. So, five figures there are. Each has a guiding presence, fully emerged from their seventh seal, their fully realised counterpart - male to female.''