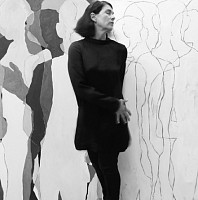 Specialising in contemporary portraiture and figurative work with a strong central theme of womanhood, Van den Berg works in oil paint on board and linen, mixed media on paper and perspex as well as sculpture.

After studying for a diploma in nursing for three years, Van Den Berg did a part-time ceramic course under Ralph Johnson at Paarl College in the 1980s, after which she worked as a ceramist for ten years. Van den Berg then studied life drawing and painting part-time at the Ruth Prowse School of Art in Cape Town in 1990.

Since then, van den Berg has been working as a full-time artist. In 2005 she was a finalist in 2005 in Sasol New Signatures and in 2009 and 2010 she was chosen as one of 50 finalist artists, out of more than 2000 applicants, for BP Portrait Awards show at the National Portrait Gallery in London. Shany has had a number of solo exhibitions from 1999 to 2019, the most recent at the Everard Read Gallery in London. She also participates in many groups shows, both locally and internationally.

Van den Berg's ethereal, sensitive oil paintings and artwork capture a mood reminiscent of contemporary mannerism and romanticism with a strong focus on womanhood. She succeeds in communicating the multi-layered emotions, ideas and modern concepts with a classical approach to portraiture and captures these ideas with a meticulous attention to detail, simplicity and subtle symbolism.

Shany van den Berg’s body of works includes monumental oil paintings inspired by the Old Masters and many other art forms, such as music and poems. They are often portraits, primarily of women, whose features morph into a composite of the artist and her loved ones, serving as portals to an internal narrative of sacrifice, struggle and ultimately transcendence.

The references are delicate and ambiguous: a nude atop a gallery plinth is transposed from stone into flesh and blood, or vice versa; a sheet draped shroud-like across an ethereal form emerging from or entering an abyss; hands depicted in gestures of supplication, prayer, self-protection or release; a red scarf or fragile scarlet thread seeming almost to flutter across and beyond the canvas. In fact, the colour red serves as a recurring literal and symbolic refrain throughout this body of works. Alongside black and white, red is an archetypal hue, suggesting rites of passage, states of mind and in-between spaces.

A sense of layering pervades her works, both in terms of the imagery itself and van den Berg’s painterly process. Despite their air-brushed appearance, the surfaces are built up of swathes, painted not onto the board but rather, absorbed into it. Shadows are imbued with texture and skins exude an almost viscous sheen. Although unmistakably feminine, some of her forms evoke a sense of animalism through their attenuated bone structure, and an underlying sexuality pervades many of the forms. They suggest recognition, confirmation and the bitter-sweet knowledge of love, loss and letting go.

my shadow, my echo, me, Bang the Gallery, Cape Town, South Africa

A Celebration of Art & Technology, group show in aid of the Nelson Mandela Children's Fund, sponsored by Hewlett Packard

Artfair Utrecht / My Own Choice

2013 Fellowship to The Ampersand Foundation in New York USA

1998 One of 12 artists, 6 from South Africa and 6 from Germany working together in Lauenberg, Germany.