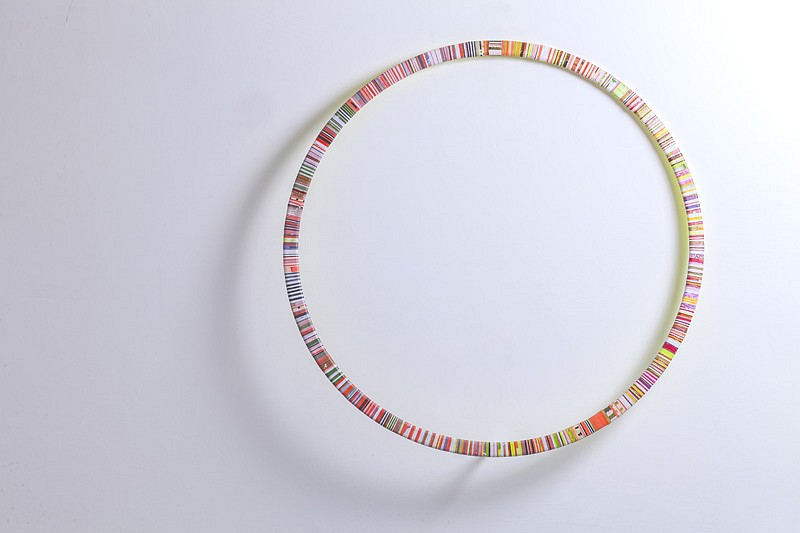 Everard Read Gallery Cape Town is proud to present Al di là del quadro / Beyond the Painting, the new solo exhibition of artworks by Paolo Bini. Bini returns to exhibit in South Africa, for the second time in three years with an exhibition of varied sized artworks in his unique language of acrylic on paper tape.The title of the exhibition Al di là del quadro/ Beyond the Painting acts here as both a descriptive term and a metaphorical intent by the artist. Encompassing not only Bini’s working methodologies and sensibilities, this new body of work equally illustrates his desires and ambitions to challenge the traditional notions of colour and surface, which ‘ we cannot touch or contain’. Poignantly this is embodied in the cover artwork of the exhibition Elios - the densely coloured sculptural ring installed protruding from the wall. This artworks’ duplicity as both a sculpture and a painting is amplified to its fullest potential. The audience soon realises that in addition to the surface conversations there are shadows cast from the form onto the wall. These are not only offered as the silhouette of the object itself (a black circular shadow) but there is a ‘2nd shadow’ - the reflection of the bright yellow verso painting on the white wall.It is these desires to address the concepts of the ‘reflections of light and colour’ and ‘one’s immersion in the surface of an artwork’, and even to capture the ‘unobtainable on the surface’ that lies at the heart of Bini’s intuitive responses and hence his practice. This is a projection for the artist of himself both physically and emotionally into the present moment. By constructing vibrant and multilayered objects Bini’s surfaces serve to engage the viewer to inspect and become saturated (both literally and emotively) in his meditations.  Leggera apparizione (Light appears) and Volume Introspective (Introspective Volume) for example are surfaces that act as fluid forms, which experiment with reflections seemingly having no endings and no beginnings.Regardless of the complexity of the work or the colours chosen the artist returns back to the notions of landscape and that which he observes around him while staying in Cape Town. Bini pushes the boundaries of his canvases horizon lines, from the extremes of the multi-layered and complex  Buon Giorno Cape Town (Good Morning Cape Town) and Grande Eden (Large Eden) to the pared down and refined tranquility of Nastri (Tapes) and Monochrome Black III. This breadth of action only serves to illustrate Bini’s desire to search out and represent the intangible essences of that which he sees and feels around him each day. Finally the smaller space adjacent to the main gallery floor contains Bini’s mixed media paintings in the Reflex series, which   while continuing to vibrate through materiality and colour also miraculously convey a very real sense of  being given a glimpse of an infinite ocean.The exhibition concludes the 31st May at the Cape Town gallery space. A portfolio is available upon request.

Paolo Bini graduated from the Academy of Fine Arts in Naples. In 2010 he represented the young Italian paintings as part of the XIII Italian Culture week, La Habana (Cuba), and was awarded a scholarship from the Grad Kultural Center in Belgrade, Serbia. In 2011 his work was presented at the 54th Venice Biennale curated by Vittorio Sgarbi. He also took part in a residency with the Centro Di Sarro Project Italy-South Africa in Cape Town. In 2014 Paolo undertook a residency at Scuola del Graffito, Montemurro, Potenza, Italy, and was commissioned to construct a site specific artwork- di NUOVO paesaggio at the Museo MADRE in Napoli. In 2015 Bini presented two solo exhibitions, Behind the visible, curated by Ivan Quaroni, Galleria ABC Arte, Milano, Italy and Astrazione modulare, curated by Valerio Dehò, Fornace Falcone.Recently in 2016,  Bini participated in  exhibitions held at the Galerie Placido (Paris) and at the ABC Contemporary Art in Milan.

Noted Public Collections include the Museum of Baronissi - FRAC (Sa), in the School of Historical Artistic Heritage of the University of Siena the Center for Contemporary Art 'Luigi Di Sarro', Rome; the Italian Embassy in Cuba, Havana, the Presidential Collection of Public Works of South Africa and in the provincial Command of the Guardia di Finanza in Pisa, Italy.